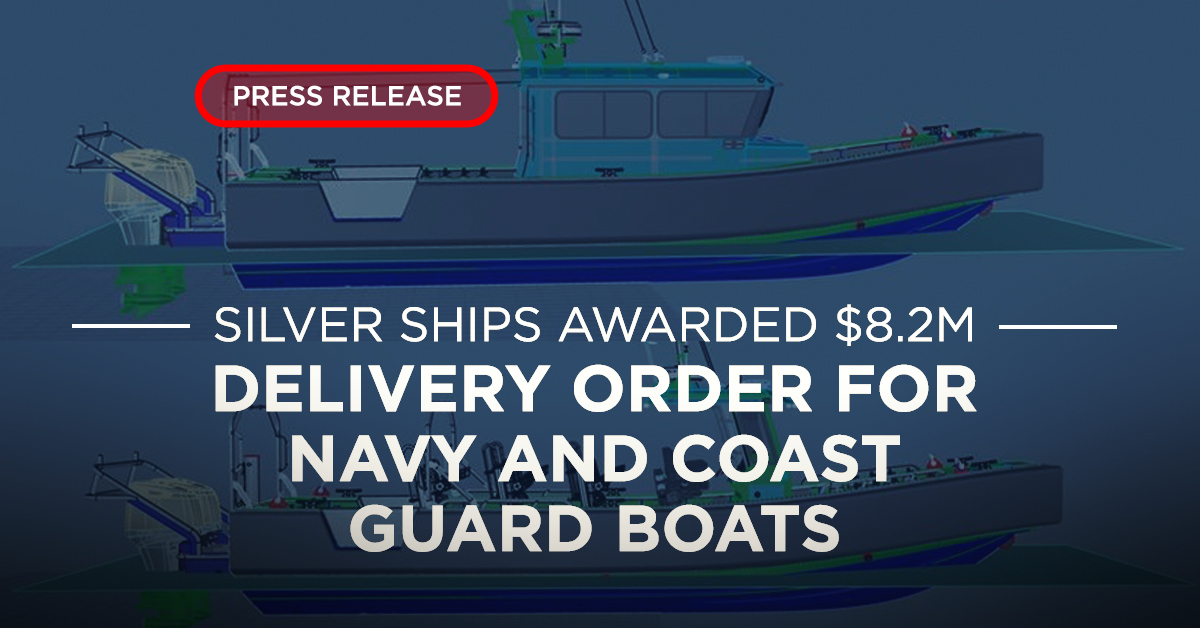 Theodore, Ala. (October 7, 2021) – Aluminum workboat builder Silver Ships, Inc. was recently awarded an $8.2 million Delivery Order as a result of being awarded a Firm-Fixed-Price Indefinite Delivery, Indefinite Quantity (IDIQ) single award contract (N00024-21-D-2205) by the Naval Sea Systems Command for the construction and delivery of up to 110 Naval Special Warfare (NSW) Surface Support Craft (SSC) and U.S. Coast GuardSpecial Purpose Craft, Law Enforcement (SPC-LE) vessels, in addition to other accessories, parts and training. The contract includes options that, if exercised, would bring the cumulative value of the contract to $51.6 million.

Over the past 20 years, Silver Ships has constructed more than 650 Rigid Hull Inflatable Boats (RHIBs) for all branches of the U.S. military. Many of these vessels are used by the U.S. Navy to support ship, aviation and Naval Special Warfare training and operational needs. All of the boats are highly versatile, rugged and designed to be operated in open ocean and near-coastal environments. Silver Ships began building the SSCs for the Navy in 2007.

“Silver Ships is excited to receive this U.S. Navy contract award to build additional NSW SSC and now the USCG SPC-LE,” said Shawn W. Lobree, Silver Ships Federal Contracts Manager. “We are very proud to help contribute to the readiness of our nation’s NSW and Coast Guard forces. Quality, customer service and teamwork are very important to us and we look forward to working with Navy and Coast Guard teams to build and deliver the five variants.” Lobree is a retired Navy captain and program manager for the project.

The new project entails construction of five different vessel variants, all AMBAR series RHIBs.  The winning designs are based closely on Silver Ships’ in-service SSCs and were developed by the company’s in-house and highly creative engineering design team, led by senior Naval Architect Clay Danielson. The craft will be built over the next five years.

The NSW SSCs are 8- and 11-meter aluminum deep-vee hulled boats with a protective collar.  Variants of the SSC include both open center console and cabin versions. These craft are used from inland bays and waterways to deep water over-the-horizon transits, in all operating conditions and weather. The Navy SSC vessels will support the Naval Special Warfare community via ocean diver and swimmer support, medical transport, vessel towing and water airdrop training, among other missions.

The 11-meter craft has a multipurpose deck for carrying various payloads or mission gear. The 11-meter Coast Guard SPC-LE vessels are armed and will be operated in varying conditions along the length of the borders of the United States and the Caribbean. Typical SPC-LE missions involve intercepting suspicious vessels entering U.S. waters; the boats will also be used for port security. In addition to the U.S. Coast Guard, other agencies within the Department of Homeland Security will operate some of the boats.

“We are honored to receive this contract. Being selected is a testament to the diligence and quality manufacturing that our small yet proud workforce produces,” said Steven Clarke, co-owner of Silver Ships. “We are pleased to have been selected to continue to deliver the best possible vessels to support the needs of the U.S. Navy and now the Department of Homeland Security. We look forward to continuing to grow our business and manufacturing output in the years to come.”

Silver Ships, Inc. produces high-quality aluminum boats for military, federal, state and municipal government as well as commercial applications through collaboration with highly skilled design, engineering and production resources. With 36 years of boatbuilding experience and corporate headquarters located in Theodore, Ala., Silver Ships’ production facilities are situated on a 32-acre plant site and use state-of-the-art boatbuilding equipment. The company’s vision is to provide customers with a boat designed, built, outfitted and best-suited to meet their operational needs while offering the maximum in crew safety and outstanding performance. Learn more at silverships.com. 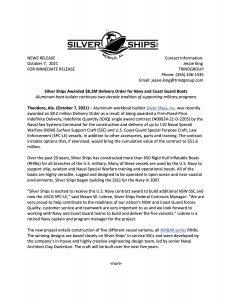