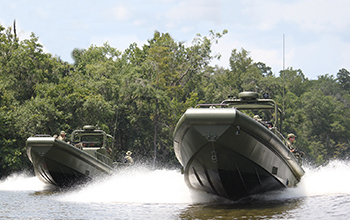 Silver Ships has manufactured aluminum vessels suitable for military use for three decades. Our team has dedicated time and resources toward making sure that we have technology and innovative designs to best support the military in a variety of missions.

Ambar Series RHIB vessels are versatile in functionality and are the most common boats in use for military missions. This series includes High Speed Maneuverable Surface Targets (HSMST) that are in operation for U.S. Navy fleet ships and tactical aircraft live-fire ordnance training on designated ranges in the Atlantic and Pacific Oceans. The Naval Special Warfare Surface  Support Craft (NSW SSC) is another Ambar RHIB used for U.S. Navy SEAL swimmer and diver training.

IDIQ contracts are used for indefinite delivery and quantity orders for military hardware and services. These contracts are usually in place for five years, and are popular thanks to the flexibility to easily increase ordered quantities and construction timelines or delivery years for the military and/or government. The military also uses the General Services Administration Schedule, where all the product lines of Silver Ships boats are advertised. GSA contracts can be for a single boat or a series of boats, typically encompassing up to two or three years of construction and deliveries.

Silver Ships has won several of these contracts over the years – our team recently concluded a 5-year IDIQ contract for HSMST in fall 2018, which consisted of building more than 200 8-meter RHIBs. We are proud to announce that we were recently awarded a new $11 million GSA contract for additional HSMST vessels. Additionally, we are approaching our fifth year of the NSW SSC IDIQ contract, and have built 30 11-meter RHIBs for the U.S. Navy. We anticipate completing eight more before the year is over.

Our team plans to continue expanding military products and developing innovative solutions to various on-the-water challenges. Learn more about our military vessels and boat series, and contact our team to get started on a project of your own.