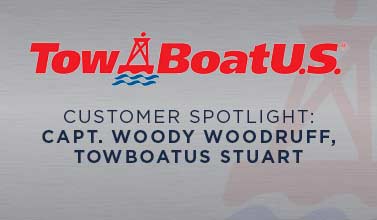 Captain Woody Woodruff, an owner/operator of a TowBoatUS in Stuart, Florida, operates two Silver Ships tow boats in his fleet. Woody has lived in Stuart since 1973 and been in marine business his entire life. He is a loyal and important customer of Silver Ships and his multiple vessels have met many challenges, yet seen much success, on the water over the years.

Back when there were no independent towing services available in the 1980s, Woody owned a boat yard. He eventually sold it to start performing maintenance and towing part-time, and even built his own tow boat. It was used to help tow houseboats and some disabled boats in the area. The towing industry officially began in 1983 when President Ronald Reagan took Coast Guard off non-emergency services, and Woody began working full-time in towing in 1992. BoatUS had already entered the market in the late 1980s, and after a few years, Woody transitioned from providing an independent towing service in Stuart through his business to joining the TowBoatUS fleet.

Woody sold his original tow boat and added a World Catamaran in 1997, an Almar vessel in 2005, then a Silver Ships Ambar vessel. He recently added a second Silver Ships vessel to his fleet, another Ambar series. Proximity to a builder was important to Woody – his operation is close enough to Silver Ships that he could make the 9-hour drive to oversee the design and build of his new boat. He brought along his own electronics and parts, and was a huge part of the process when Silver Ships built this vessel. This year he plans to add outboards to his Almar boat and refurbish his original Silver Ships vessel.

Woody’s operation most often assists disabled boats on the water. This can include performing battery jumps, re-fueling, helping with grounding and more. There have also been instances when he has worked with law enforcement on smuggling issues and putting out fires. It is also common for his team to assist and escort large yachts (up to 150 feet) in shoaling situations, which can be challenging due to the yacht’s size.

His territory includes the St. Lucie inlet, which is 40 miles north of Palm Beach. This body of water requires local navigation knowledge and can be very dangerous in certain conditions, including rough water featuring 8- to 10-foot waves.

When asked what makes for a great tow boat, Woody has a few suggestions. “Storage is important, and the boat needs to be able to run well in all types of water, including upsea/rough sea,” says Woody. “I keep my vessels loaded with a gas pump, hoses, packing materials, two types of towing lines, battery jump packs, battery logs on the outside of the vessel, and two 6-gallon gas jugs – and they all must be stored somewhere.”

“Woody takes his business and towing services very seriously, and his team does a top-notch job with keeping his territory’s waters safe,” says Steven Clarke, co-owner of Silver Ships. “Silver Ships is honored to be a part of this industry that takes responsibility for helping people on the water.”